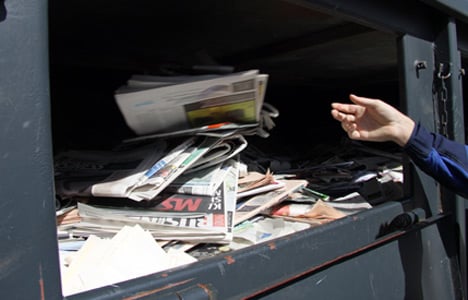 Easy sorting options would lead Danes to recycle more, survey shows. Photo: Colourbox
According to a Eurobarometer survey, Danes lag behind the rest of Europe when it comes to sorting basic waste like paper and plastic.
While the EU average for sorting paper and cardboard is at 90 percent, just 79 percent of Danes reported sorting their paper waste. This places them far behind the paper recycling champs in Austria, 99 percent of whom report sorting their paper waste. Denmark is even further behind in dealing with plastic waste, with 76 percent of Danes sorting plastic compared to the EU-28 average of 90 percent.
The survey indicates that Danes are aware that they could do better, with 56 percent of Danish respondents saying that their household generates too much waste. Only the Dutch, at 58 percent, had a higher number.
Denmark has long preferred burning waste to recycling it. Nationwide, almost 80 percent of all household waste is burnt in incinerators. In October, the then environment minister Ida Auken announced a new nationwide strategy to recycle more and burn less.
“We've become too good at burning and too bad at recycling,” she said when announcing a new national waste plan, Denmark Without Waste (Danmark uden affald). “It's bad for the environment and it doesn't make sense in a world where the demand for resources is increasing everyday.”
Although they are behind their European peers in sorting paper and plastic, Danes perform much better when it comes to other forms of waste. The 92 percent of Danes who sort their electrical and electronic waste far outpaces the EU average of 76 percent, and while 91 percent of Danes report that they sort hazardous household waste like paint and batteries, just 79 percent of other Europeans do the same.
In order to separate more waste, Danes reported that they would like it to be more convenient and come with a financial incentive. The country also had the highest proportion of respondents who would like to pay a fixed sum for waste management through their taxes.
Although Denmark had mixed results in waste sorting, the nation appears to be a forerunner in embracing the ‘circular economy’, with a heavy reported interest in purchasing long-lasting and environmentally-friendly products and a willingness to buy second-hand goods. While just 55 percent of EU respondents said they would buy second-hand furniture, more than seven out of ten Danes said they would do so.