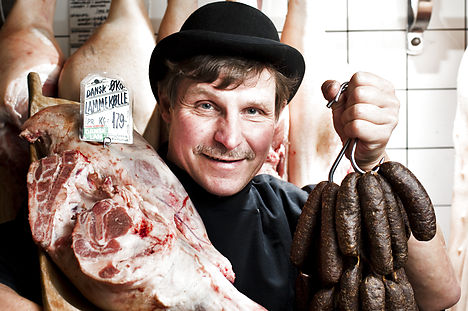 Jens Slagter. Photo: Jonas Vandall Ørtvig/Scanpix
If you’ve been to Copenhagen, you’ve almost certainly passed Jens Slagter’s butcher shop.
Just a short jaunt from Nørreport Station at the popular city square Kultorvet, a gold bull’s head sits atop the shop, which has been providing meat to Copenhagen residents since 1888.
Inside you’ll find Jens Slagter (literally Jens Butcher) in his traditional bowler’s hat. But over the course of the past few weeks, Slagter has become known just as much for his legal battle as his choice cuts of beef.
On Monday, Slagter was handed a 190,000 kroner ($35,000) fine for violating immigration laws. He says the fine is enough to bankrupt the historic butcher's shop and argues that his case is an unfair example of just how complicated the immigration laws are.
Slagter employed a Nepalese man living in Denmark on a study permit. The Nepalese student worked at the shop, Slagteren ved Kultorvet, for over two years and Slagter says he was a good employee. But according to immigration laws, the man was not allowed to work more than 15 hours per week. Slagter argues that he verified that his Nepalese employee had a valid work permit and that as an employer, he shouldn’t be required to dig deep into the fine print of the nation’s immigration laws.
He also found it curious that no one pointed out the violation until recently, saying that everything was laid bare for the tax authority Skat to see.
“Skat has happily taken this illegal money for two and a half years,” Slagter told Metroxpress after the court ruling on Monday. “It’s a bit strange that it isn’t illegal for them, but it is for me.”
Slagter said he is prepared to fight the matter further.
“I appealed to the High Court as soon as I received the fine,” he said. “I will absolutely not lay down when I have been treated unfairly, that’s not the way I was raised.”
Jens Slagter was not the only one to be fined for violating the law on how many hours a foreign student can work.
Claus Meyer, the famed television chef and a co-founder of Noma, was fined 250,000 kroner for allowing students to work illegally in two companies he operates. The amusement park Tivoli was also fined 60,000 kroner for allowing a foreign student to work more than 15 hours a week.