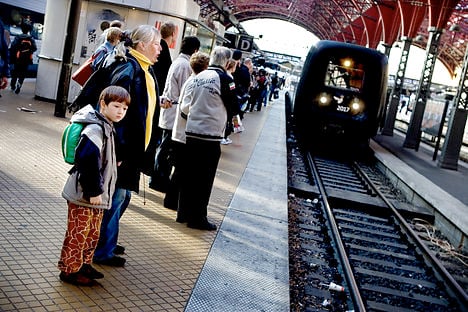 A DSB smoking ban is among the changes ushered in on July 1st. Photo: Uffe Weng/Scanpix

Lower roaming charges
Roaming charges for mobile phone users travelling within the EU will drop on July 1st, including a 55 percent price cut for data downloads.

Beginning on Tuesday, EU mobile phone subscribers will pay a maximum extra charge of 1.5 kroner (€0.20, $0.27) per megabyte for downloads while visiting another member country, down from the 45 cents charged now.
Those travelling within the EU will also enjoy cheaper phone calls. Outgoing calls will cost 19 cents per minute, instead of the current 24 cents, and it will cost 5 cents to receive a call instead of 7 cents. For more on the new mobile phone prices, see the video below.
No smoking on DSB platforms
National rail operator DSB will be completely smoke-free come July 1st. That means that smoking will no longer be allowed on platforms or any other areas of DSB's train stations.
The smoking ban was announced in May of last year and follows a smoking ban on trains that has been in effect since 2007.
According to DSB, the cost of removing cigarette butts from its train stations costs 50,000 kroner per day.
"Our cleaning personnel estimates that around 25,000 cigarette butts are thrown on our properties every day, so hopefully we will save some money on cleaning," DSB spokesperson Susanne Mørch Koch told DR. "But it's important to stress that the smoking ban isn't an attempt to save money. The focus is health and the cleaning aspect is just a positive side effect."
Stricter drunk driving laws
Beginning July 1st, tougher laws on driving under the influence will allow police to confiscate the vehicles of first-time offenders. Motorists caught driving with a blood alcohol content (BAC) of 0.21 percent and above can have their vehicles confiscated on the spot, as can drivers stopped with a BAC of 0.12 percent who have have a previous drunk driving infraction within the past three years.
No more shooting Fido
Also coming into effect on July 1st will be a change in property laws that will make it illegal to shoot your neighbour's troublesome pets.