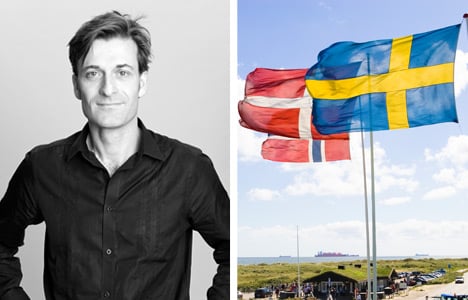 Danish radio host Mikael Jalving said Swedes perceptions of themselves are "prime for satire and controversy". Photos: Stine Nielsen, Colourbox
For two countries that have so much in common, Denmark and Sweden have vastly different approaches to the public debate.
While Swedes accuse Danes of taking their zeal for the freedom of expression to extremes (see the Mohammed cartoons), Danes in turn view Swedes as a conflict-adverse and repressed lot whose self-censorship has left them with their heads in the sand.
This key difference will be at the heart of a new programme on the Danish radio station Radio24syv. The programme, Danmarks Röst (Denmark’s Voice), will be aired from Copenhagen but targeted at an audience on the other side of the Øresund.
The Local asked the programme’s host, Danish historian and author Mikael Jalving, about his effort to help Swedes deal with taboo subjects.
Why do two countries that are otherwise so similar have such differing approaches to public discourse?
“It’s really a fascinating question. After all, we look alike, we sound alike, we dress alike, and we even eat alike – generally speaking. We tend to ally on international affairs and tend to agree on major issues related to the social-democratic welfare state.
But there are a lot of differences and barriers between us, one of them being that the presence of dissent and ideological tensions is much more taboo in Sweden than here. The political nobility of Sweden seems to be obsessed with mainstreaming the right ‘värdegrund’ [values] of tolerance, equality and multiculturalism. So it’s not just a difference of opinion on certain topics, but rather how we tackle issues and taboos.”
What are some topics that are discussed in Denmark but taboo in Sweden?
“First of all, we all have taboos. But in Sweden, having taboos is preferable to criticising them. You see this in areas like immigration and the integration of people from Muslim countries, feminism, prostitution, authority, nationality, crime and punishment, and even the approach to schooling. These will be some of the issues we focus on.
Swedes view the Danish discourse as something evil, racist, fascist – you name it. So you can look at this cultural divide in two different ways. What we will do is to state the differences and exaggerate them a bit in order to have a discussion.” How do you view modern Sweden?
“Sweden perceives itself as this avant garde country at the forefront of Europe, showing Europe how it ought to be. This self-stature is prime for satire and controversy. Who are they to claim to be the avant garde?
I see the relationship between Danes and Swedes a bit like the Hans Christian Andersen tale The Emperor’s New Clothes. The Swedes, as the much larger nation, are like the king, while we Danes are very fond of taking on the role of the little boy. We see ourselves as the truth tellers, so Danes are the ones pointing out that the king is naked.”
One of the taboos you plan to address in the programme is Sweden’s attitudes towards immigration. How do the two countries differ in this area?
“The first taboo in Sweden is that immigration is a good thing. It is presented as something profitable – financially, politically, and culturally – and as a refreshing and rebooting of the populace. The next is that the quantity of immigrants doesn’t matter, that you can take in as many as you want. In any other European country, whether one likes immigration or not, quantity is a natural topic of discussion. How many can we take in? That is a practical and pragmatic question, but Sweden does not have that conversation, and recently one of the ministers nearly got kicked out of office for mentioning the proportionality issue. Pragmatism is seen as something unholy or evil.”
The Danish media often accuse their Swedish counterparts of suppressing negative coverage of immigration. Has there been a decision in Sweden to stifle all anti-immigration talk?
“I don’t think there is a conspiracy or some sort of master plan, but there is a culture of mainstream self-censorship and a merging of interests. If a journalist breaks the code, they cross a line and then their career could be jeopardised. It’s a real downward spiral of silence. I don’t think the Swedish media, political and culture elites sat down and formally agreed on these things, it is either a subconscious mechanism or a calculated behaviour.”
Your programme is aimed at Swedes, but at the same time you say they are reticent to talk about major issues. Do you think you’ll get Swedes to call in?
I sure hope so! This show and my book [Absolut Sweden: A Journey in a Wealth of Silence] are not out of revenge or hatred, but rather to explore how it can be that two countries that share so much history can be so different when it comes to high ideals, politics and living in the modern world.
The whole test of the show will be if we can get some Swedes to call in and participate. We have no doubts about the Danes, they are big talkers and love to debate. Swedes talk little but are very good about making decisions, while Danes talk a lot but aren’t very good decision makers.
If the Swedes get in hot water for talking about Sweden, they can just claim it was in Denmark, and that the host was a blatant racist – so they will have an excuse. Or that they were drunk or something…
And most of the time Swedes are in Denmark they’re drunk anyway, right?
Ha ha ha! Let it be said that that was your comment and not mine!
Danmarks Röst premieres on June 30th on Radio24syv. You can listen to the programme online here.