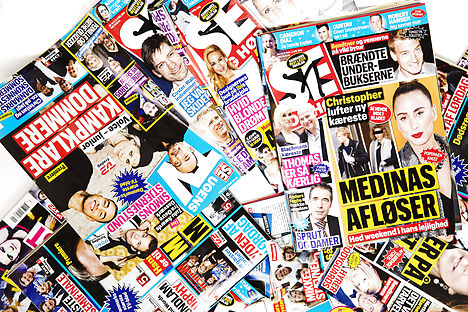 Se og Hør magazine for years paid for the private credit card information of royals, politicians and celebrities. Photo: Kasper Palsnov/Scanpix
The former news head of gossip magazine Se og Hør was charged by police on Friday for her part in the magazine’s illegal snooping into private credit card information.
The charges against Lise Bondesen bring the total number of people indicted in the ongoing media scandal to eight.
Former Se og Hør journalist Ken Rasmussen revealed in April that the magazine had for years illegally monitored the credit card information of the royal family, politicians and celebrities via a paid source at the credit card company Nets.
Bondesen has admitted that she was aware of the magazine’s use of the illegally-obtained credit card information, but claimed that she put an end to the practice.
“She stands by what she has said all along: that she was aware that such things happened at the magazine,” Bondesen’s lawyer, Christian Riewe, told Berlingske.
The new charges against Bondesen came on the same day that Se og Hør’s publisher, Aller Media, fired three employees involved in the scandal.
As a result of an internal investigation, the publisher fired an editor, a journalist and an accountant. Thee additional employees received written warnings.
The internal investigation revealed that the magazine paid a total of 310,000 kroner ($56,750) between 2008 and 2011 to its source within Nets. The source, 45-year-old Peter Bo Henriksen, also faces police charges. Henriksen on Thursday lost a legal battle to bar media from revealing his identity.
The Se og Hør scandal, widely recognised as the biggest of its kind in Danish history, has now led to a total of eight indictments. In addition to Rasmussen, Bondesen and Henriksen, others facing charges include two former editors-in-chief at the magazine, Kim Henningsen and Henrik Qvortup, the latter of which was forced to leave his job as a prominent political commentator for TV2.
Aller Media itself is also charged in the case, though the publisher said that its internal investigation revealed that leadership was unaware of what was going on at Se og Hør.
Among those whose private information was accessed by the gossip mag are Prince Joachim, former PM Lars Løkke Rasmussen and actor Mads Mikkelsen.
Many observers have drawn parallels with Britain's News of the World, which was shut down by Rupert Murdoch in July 2011 following allegations of widespread phone hacking.