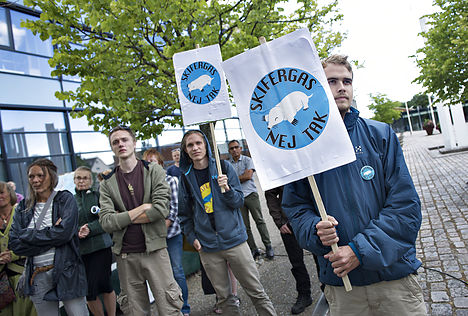 Despite protests, the Frederikshavn council approved the first shale gas exploration project in Denmark. Photo: Henning Bagger/Scanpix
The northern Jutland town of Frederikshavn will be the site of Denmark’s first ever shale gas exploration site.
As anti-fracking protesters stood outside the Frederikshavn city council building last night, city officials voted 27-4 to approve exploratory drilling by the French gas company Total.
Total will be allowed to drill in search of shale gas in the municipality of Dybvad, southwest of Frederikshavn. If shale gas is found, Total will then explore the possibility of extracting the shale gas through fracking, the pumping of pressurised, chemical-laden water into underground rock layers.
The French company was granted approval despite strong protests from the local community and concerns from organizations including Greenpeace and the Danish Society of Nature Conservation (Danmarks Naturfredningsforening – DN).
Calling Frederikshavn council’s decision “very disappointing”, DN said the exploration of shale gas is the wrong way to go for Denmark.
“The Danish government has set a goal for Denmark to have a fossil-free energy supply by 2035,” DN states on its website. “New discoveries of shale gas will increase the global supply of fossil fuels, which will cause prices to fall and can pull the rug out from under further investments in renewable energy.”
Greenpeace called the decision “deeply disappointing”.
“The decision can have far-reaching consequences for the environment,” Greenpeace spokesperson Trjei Haaland said in a statement. “The extraction of shale gas can pollute our groundwater with harmful chemicals and damage the environment with fossil fuels that are unnecessary in the Danish energy supply. It is completely the wrong direction for Denmark.”
The climate and energy minister, Rasmus Helveg Petersen, told Ritzau that he “took note of” Frederikshavn’s decision but stressed it their “responsibility and right” to approve the deal with Total.
The French company Total is the fifth largest international energy company. Its home country has had a ban against fracking in place since 2011.