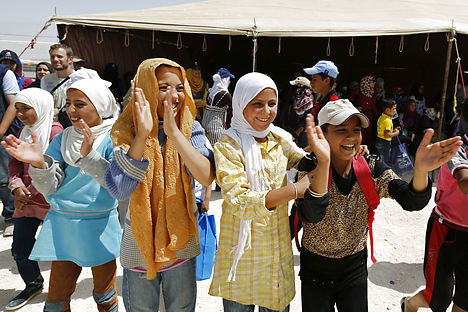 Syrian refugee girls watch a football match in a refugee camp in Jordan. Refugees making their way to Denmark are finding a lack of permanent housing. Photo: Muhammad Hamed/Scanpix
Denmark took in nearly 4,000 refugees in 2013. In raw numbers, that puts the country well behind neighbours Sweden and Germany, which opened their doors to more than 28,000 and 26,000 respectively.
But viewed in relation to total population, Denmark took in the fourth largest number of refugees last year amongst EU countries. For every million residents in Denmark, 694 refugees were accepted. While this moves Denmark up to number four among EU countries, it still lies far behind Sweden, which accepted 2,952 refugees per million inhabitants. Only Malta took in a higher proportional share.
Of the 3,889 Danish resident permits granted to refugees last year, over a third went to Syrians. The 1,382 Syrians given refugee status in Denmark represented by far the largest single group. As a whole, Denmark took in 50 percent more refugees in 2013 than in 2012.
But the influx of refugees has led to the problem of where to house them.
Many of the refugees are currently living in camping trailers, hotels and former care homes. Local Government Denmark (Kommunernes Landsforening), which represents all of Denmark’s 98 municipalities, reported that eight out of every ten municipalities is struggling with where to put the refugees.
“A care home isn’t a great place, but we have done what we can within the existing framework,” Maria Tvarnø, the administrative director for the Roskilde city council, told Danmarks Radio. “This isn’t just Roskilde’s challenge, it’s a challenge for all of Denmark.”
Although there are accommodations available in several municipalities, Denmark’s immigration laws stipulate that refugees need to be spread out evenly throughout the country.
The integration minister, Manu Sareen, said he is working with municipalities to find a solution.
“It’s sad that [refugees] have to start their lives in Denmark at a camping ground,” Sareen told DR. “These can be used temporarily, but in the long run it’s not a sustainable solution in any way. This isn’t about [the municipalities’] problems or [the government’s] problems. It is the responsibility of all of us to extend a hand to these very vulnerable people.”