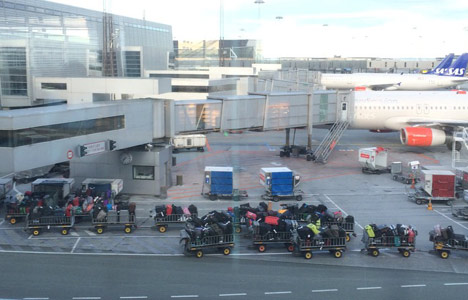 All SAS passengers are currently stranded at Copenhagen Airport due to a strike by baggage handlers. Photo: Submitted

Due to a worker strike by baggage handlers, SAS airline has now decided to fly stranded passengers without their luggage.

"They are flying us without luggage," stranded passenger Pat Potter, who is flying to London, told The Local. "If you don't fly without luggage, then SAS says you are responsible for your own transportation and hotel – what crap! When they said that, it really set people off. I opted to fly and I just hope that my baggage will arrive before my next flight to LA on Monday."

A second affected passenger at Copenhagen Airport who is flying to Berlin told The Local that passengers on his flight are also being flown without their bags.

A strike by SAS Ground Holding has grounded all of the airline's flights at Copenhagen Airport this evening, The Local has learned.

"All of the bags are just sitting outside," he told The Local by phone from the airport. "People are not really being told anything. I was told that my flight to London was being delayed and that the following flight to London would also be delayed. People are going to have to be put up in hotels and this is likely to cost SAS thousands of dollars."

Potter, who lives in London, is trying to return home from Rome.

"Right now, we are just stranded at the gate," he said. "This was supposed to just be a quick layover. I'm missing my girlfriend's birthday for this. There are three diplomats from the British government here screaming at the SAS personnel: 'Charter me a flight, you wanker!' The Danes seem a little unsure about how to deal with that."

Potter said he was told that SAS flights are fully booked through tomorrow, a day that is expected to be the busiest travel day of the year with up to 100,000 passengers as Danes skip town on the first day of summer holiday.

According to Danmarks Radio, the striking baggage workers have gone to a meeting to discuss ongoing negotiations with SAS management on working hours and salary.

A SAS official told DR that the situation was "completely unacceptable" and that the company currently has no indication on when the striking workers will go back on the job.

"At a huge inconvenience to our customers, we cannot get our flights out," Trine Kromann-Mikkelsen said. "We urge [the striking workers] to [get back to work] right away so that this doesn't become extremely costly for SAS or extremely expensive for our customers."