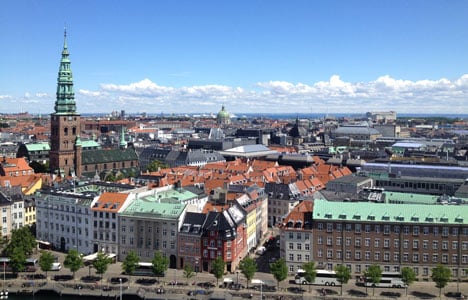 Copenhagen from above. Photo: Justin Cremer
Dear reader,
It’s my pleasure to welcome you to The Local Denmark.
The plans to launch a Danish edition of The Local have been underway for some time now, so I’m very happy to pull back the curtains and reveal the site to you.
If you’re reading this from abroad, you might know Denmark as the home of Nordic noir, the world’s happiest people and the world’s greatest restaurant. But there is much more to Denmark than its penchant for landing on the top of international lists, as those of you reading from within the country can likely attest.
Yes, we ride bikes everywhere and yes we pay the highest taxes in Europe but those things only begin to scratch the surface of what life is like in Denmark.
Politically, the country is in a very interesting place at the moment. The centre-left government’s unpopular welfare reforms have opened the door for a resurgence by the anti-immigration Danish People’s Party, a party many thought would be relegated to the sidelines after a decade of pushing this traditionally progressive country’s policies to the right.
Meanwhile, the country’s main opposition leader, former PM Lars Løkke Rasmussen, was not so long ago a seeming lock to return to power, but that was before scandals involving his luxurious travel habits and his underwear.
For her part, although PM Helle Thorning-Schmidt states repeatedly that she plans to stick around, many see her as already having one foot out the door on the way to a top EU position.
And you thought the fictional Borgen was entertaining!
On the economic front, the country appears to be on the verge of turning around its lacklustre post-crisis performance, but still needs to deal with sluggish productivity and its record levels of private debt.
Culturally, Denmark still very much seems a country unsure about how to deal with immigration and an increasingly globalised world.
The Local Denmark looks forward to reporting on all of these topics and much more, along with a healthy smattering of pieces highlighting the lighter side of life in Denmark.
But we can’t want to do it alone. We need your help. Get in touch with us and tell us what you want to know more about. Tip us off about stories important to you. We’d particularly like to hear from foreign professionals within the country so that we can highlight the plusses and minuses of life as an expat.
And of course, if you’d like to advertise with us and reach the four million people who read The Local’s various editions each month, we want to hear from you too.
You can jump into the conversation here on the site or find us on Facebook and Twitter.
Happy reading,
Justin Cremer
Editor