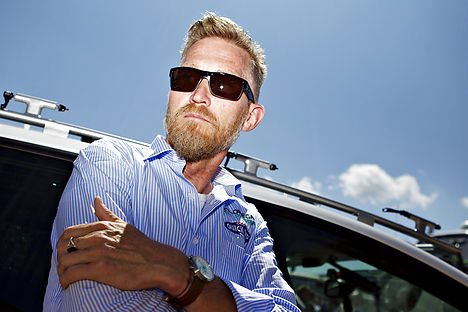 Holm stepped forward voluntarily last month to address the charges saying he had nothing to hide. Photo: Nils Meilvang/Scanpix
The former professional Danish cyclist Brian Holm has been officially charged with indecent exposure, his lawyer told media today.
Holm denies the charges.
“I have discussed the charges with him, but he was well prepared for it,” Holm’s lawyer, Karoline Døssing Normann, told TV2 News. “It doesn’t change his position, which is that he denies any wrongdoing.”
Holm, who is a sports director for the Omega Pharma-QuickStep cycling team, stepped forward on his volition last month to say he had been charged with a sexual crime against a minor.
“I’m stepping forward now because I have nothing to hide,” Hold said at a May 27 press conference.
Holm, 51, has not been formally arrested and his lawyer did not go into details about the charges.
Holm rode professionally from 1986 to 1998 and competed in seven Tour de France races, completing one. He was part of the team in 1996 when fellow Dane Bjarne Riis claimed the yellow jersey.
He admitted in 2002 to having doped while competing professionally. Riis has also admitted to using performance enhancing drugs during his cycling career, including when he won the Tour de France.
In November’s council elections, Holm was elected to the Frederiksberg city council but has taken a leave while the criminal case is underway.