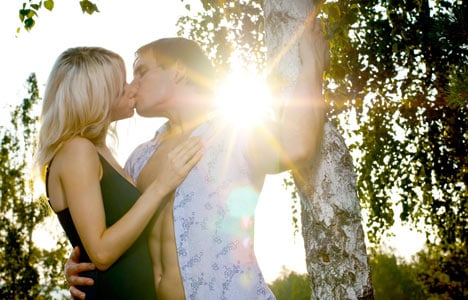 Photo: Colourbox
Nearly half of Danes aged 18-29 fantasize about having sex in nature according to a recent survey.
In the survey, 49 percent of respondents under the age of 30 responded that they would like to have sex under the blue skies this summer. The young, perhaps unsurprisingly, were more willing to go at it among the trees than other age groups. As a whole, 29 percent of all respondents aged 18-74 said they fantasized about getting busy in nature.
Nature lovers welcomed the news.
“Nature is well suited for that purpose,” Michael Leth Jess, the director of the Danish Society for Nature Conservation (Danmarks Naturfredningsforening), told Metroxpress newspaper. “There are many beautiful places in nature that are just waiting to be used.”
Those looking to live out their fantasies need only to worry about their own modesty, as it is perfectly legal to have sex in the Danish nature.
Jess encouraged discretion however and suggested that the al fresco sex happen away from areas likely to be frequented by small children.
If you want to have sex in nature but haven’t yet found someone that shares your desires, fear not. A website called sexidetfri.dk has nearly 2,000 profiles of people looking to make a ‘natural connection’. The numbers there are a bit one-sided however, with 73 percent of members being men.
The sex survey was conducted by YouGov for Metroxpress.