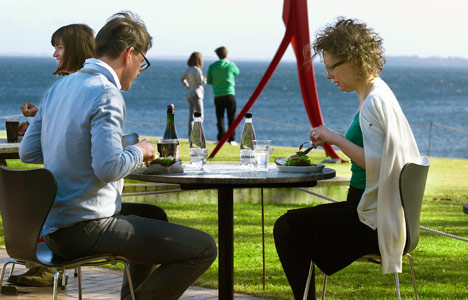 Average Danes enjoying an average meal. Photo: Lars Ranek/Copenhagen Media Center
Meet Anne and Peter. She is 42 years old, while he is just a bit younger. Their best friends are Kirsten and Jens. Anne and Peter have two children, Sofia and Lucas, while Kirsten and Jens have a son named William.
They are all average Danes.
Statistics Denmark released its statistical yearbook for 2014 on Monday, revealing what the average Dane is named, how much money they make, how many children they have, how often they visit the doctor, where they prefer to holiday and much, much more.
The 500-plus page yearbook tells the story of all 5.6 million Danes through facts and figures. That they see an average of three hours and eight seconds of TV a day, that they borrowed 29,427,062 books from the library last year and that 98 percent of them have a mobile phone.
After sifting through the wealth of information, The Local got to thinking. In this tome of normality, did anything strike the statisticians as abnormal? We spoke to Statistics Denmark’s senior adviser Ulla Agerskov, an editor of the yearbook, to find out.
“One of the things I found surprising was that we watch over three hours of television a day,” Agerskov told The Local. “That really strikes me as a lot. The other thing is just how much better girls are performing in school than boys. That’s something I hadn’t noticed before. It was also rather surprising to see the dramatic increase in the number of women who are charged with violent crimes.”
According to the numbers, girls receive an average grade of 7.1 in high school compared to a 6.8 average for boys*. More girls are also graduating than boys.
When it comes to violence, 609 women were charged with violent crimes in 2012, a six-fold increase from 1990.
Anne and Peter
If you meet a Danish couple on the street, statistically speaking they are likely to be named Anne and Peter. There are 47,007 Annes and 49,811 Peters, followed closely by 43,997 Kirstens and 49,211 men named Jens.
Anne and Peter are getting older, along with the rest of their countrymen. The average age of the Danish population is now 40.9 years, compared to 1980 when it was just 36.7. The average Danish man is 40.0 years old and the average Danish woman is 41.8. Danes are also living longer. In 2014, a total of 996 people are 100 years old or older, a six-fold increase over 1980 when just 158 people hit the century mark.
Along with all of those Annes and Peters, there are also now many more exotic names in the national registry. At the outset of 2014, the 626,070 immigrants and their descendants living in Denmark accounted for 11.1 percent of the country’s population. They come from almost all corners of the globe, but the largest immigrant group by a long shot come from Turkey. Turks represent 9.8 percent of all immigrants and their descendants.
Money, money, money
The average income for Danes above the age of 15 was 292,000 kroner ($53,300). Statistics reveal that income inequality is still an issue in Denmark, as men had an average income of 329,000 kroner while women earned an average of 256,000. Performing best financially are couples with children. That demographic has an average pre-tax annual income of 851,200.
But Danes now have to commute further to make that money. The average Dane now travels 19.8 kilometres to and from work, 2.2 kilometres longer than in 2006.
The average Danish household spends 32,249 kroner on food each year, most of it on fish and meat. The preferred place for spending money on holiday is Spain, which was the destination of 15 percent of all Danish holidays.
For much more about the average Dane, the entire yearbook – which has been put out every year since 1896 – is available via the link below.
* The Danish grading system uses a seven point scale that was introduced in 2007: