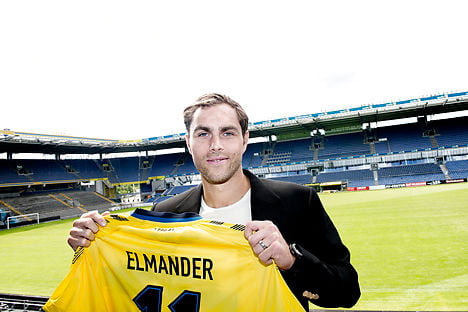 Back to where he once belonged. Photo: Liselotte Sabroe
Brøndby IF today announced that Swedish forward Johan Elmander has signed a two-year contract joining on a free transfer from Turkish giants Galatasaray. Last season he was a loan player for Norwich City, making 28 appearances.
Elmander, 33, now returns to Denmark and Brøndby IF where he played from 2004-2006, and instantly became a cult hero of the renowned 'Faxe Stand', home to the most faithful supporters of Copenhagen suburb based team.
From the Danish Superliga supporters' perspective the signing should not only raise a few eyebrows but also excite pundits and fans alike seeing as Elmander, albeit no spring chicken, still has have a lot to offer on the pitch.
Despite recently not reaching the heights of his early Brøndby days, it is quite evident that Elmander, who still plays on Sweden's national team alongside superstar Zlatan Ibrahimovic in attack, will give Brøndby and the Superliga a timely boost with his mere presence.
“[Johan] is undoubtedly a player from the top shelf,” Brøndby's sports director, Per Rud said in a statement. “Besides having an amazing history with Brøndby, Johan Elmander is still an incredibly talented footballer.
Swedish Allsvenskan side IFK Göteborg tried to lure their compatriot back to his homeland, but Elmander had his heart set on returning to the club that played a major part in igniting and forming his career and where he has always felt "at home".
Superliga powerhouse Brøndby IF has struggled over the past years on and off the pitch, but especially the appointment of coach Thomas Frank last season and the recent injection of capital to attract players of Elmander's calibre, has appeared to have awoken the sleeping giant.
Relive some of Elmander's best moments from his first stint with Brøndby: