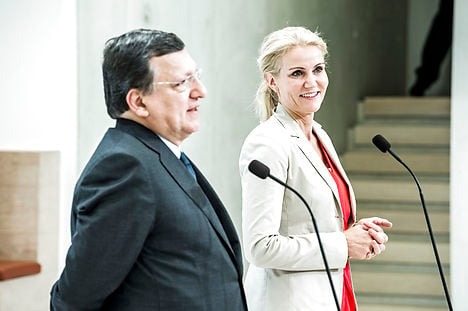 In the third in a weekend series of high-profile meetings, Danish PM Helle Thorning-Schmidt met yesterday with EU Commission President Jose Manuel Barroso. Photo: Christian Liliendahl/Scanpix
For someone who has insisted time and time again that she’s not interested in a top EU post, Helle Thorning-Schmidt’s schedule over the last few days sure has been filled with meetings that seem to suggest otherwise.
In the span of Thursday through Sunday, the Danish prime minister met with German Chancellor Angela Merkel in Berlin, French President François Hollande in Paris and EU Commissioner Jose Manuel Barroso in Copenhagen.
With forces beginning to coalesce around the selection of Jean Claude Juncker as Barroso’s replacement as the head of the European Commission, the rumours swirling around Thorning-Schmidt now point towards her receiving the nod to head the European Council. That post will be vacated in November when Herman Van Rompuy steps down.
As she did while meeting with both Merkel and Hollande, Thorning-Schmidt tried to deflect questions about her political aspirations.
“It is much more important to focus on what the EU should do over the next five years than on who should do it,” she said at yesterday’s press conference with Barroso.
For his part, Barroso praised Thorning-Schmidt as a "dedicated European" and avoided speculation on any looming future appointment.
“It’s my personal opinion that Prime Minister Thorning-Schmidt has been, and is, a very good prime minister of Denmark and from the conversations I just had with her, I got the impression that she wants to remain a good prime minister of Denmark,” Barroso said.