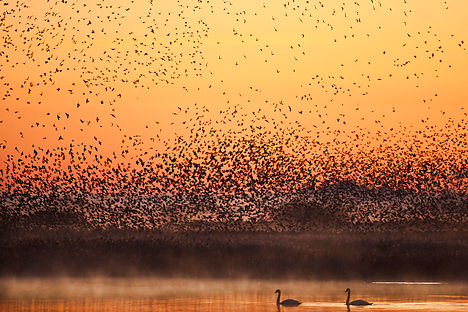 The Wadden Sea. Photo: Steffen Ortmann/Birds-of-Denmark/Scanpix
As expected, Denmark was awarded its first two nature sites on the Unesco World Heritage List.
Stevns Cliff (Stevns Klint) and the Danish portion of the Wadden Sea (Vadehavet) were approved for inclusion on the list at the Unesco committee meeting in Doha over the weekend. The two sites join such global natural treasures as the Great Barrier Reef and the Grand Canyon. With the weekend’s new additions, Unesco now recognizes 1,001 heritage sites.
Stevns Cliff and the Wadden Sea are the first Danish natural sites on the list. The Jelling stone, Roskilde Cathedral and Kronborg Castle are recognized by Unesco as cultural heritage sites.
”I am proud that the Unesco World Heritage Committee recognized the unique value of Stevns Cliff, and particularly proud that Denmark has once again made a contribution to our common world heritage and, in that way, helped forge bonds across national boundaries,” the culture minister, Marianne Jelved, said. Stevns Cliff, a 15km stretch along the southeastern coast of Zealand, tells a unique story of our planet's history, displaying physical evidence of the asteroid impact 65 million years ago widely believed to have caused the extinction of dinosaurs.
The site currently pulls in around 100,000 visitors a year, a number almost certain to increase significantly with its new designation.
The environment minister, Kirsten Brosbøl, hopes that the second Danish addition to the heritage list will also become a tourist destination.
“The stamp of approval as a heritage site can transform the Wadden Sea to a green tourist magnet for the whole world, and together with Germany and the Netherlands, we can market the Wadden Sea as a unique nature experience,” Brosbøl said.
The Dutch and German portions of the Wadden Sea were inscribed on the World Heritage List in 2009. The new designation extends it to the Danish portion of the sea. The Wadden Sea is the home to sea mammals including the harbour seal and grey seal, as well as 10-12 million migrating birds that feed off the lush life found in the sea’s marshes and sandbars.