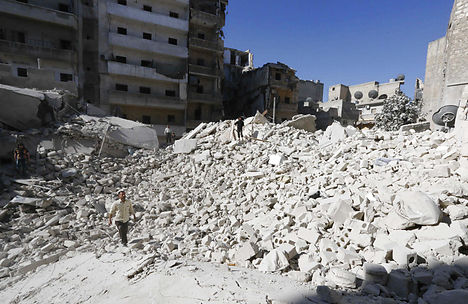 An Aleppo site damaged by what activists said was a bomb dropped by forces loyal to Syria's President Bashar al-Assad. Photo: REUTERS/Hosam Katan
A Danish freelance photographer has been freed after being held hostage in Syria for 13 months, the foreign ministry said late Thursday.
Daniel Rye Ottosen was captured in Syria on May 17th last year after travelling to the country to "document the conflict and the living conditions of civilians, especially children," his family said in a statement emailed by the foreign ministry.
Sources close to the situation told news agency Ritzau that the Islamic State of Iraq and the Levant (ISIL) was behind the kidnapping and that a ransom had been paid for Ottosen's release.
The family said the 25-year-old was "under the circumstances [feeling] well and is now about to be reunited with his family."
"Daniel's case has long been known by the Danish press, but in the interest of Daniel's security everyone has refrained from covering the story," it said.
The family said it didn't want to be contacted by the media and the foreign ministry said it wouldn't give any further information about the incident.
A former elite gymnast, his family had appealed to gymnastics groups to contribute to the ransom payment, Danish media reported.
Ottosen had previously been working as an assistant for award-winning Danish photographer Jan Grarup, known for his work in warzones.
A war pitting Syrian rebels against ISIL has killed more than 6,000 people, mostly fighters, since it broke out in January.
In Iraq, the swift advance of fighters led by ISIL has sparked international alarm and a UN warning that the crisis was "life-threatening for Iraq".
Hundreds of thousands of Iraqis have been displaced in ten days of fighting and an unknown number killed.