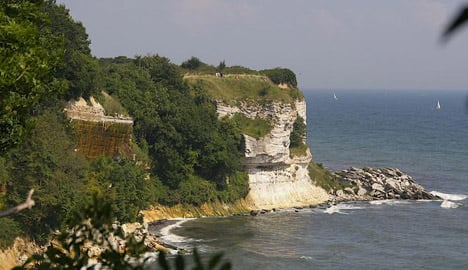 Along Stevns Cliff can be found evidence of the dinosaurs' extinction. Photo: Visit East Denmark
When the UNESCO World Heritage List is updated this weekend, two Danish sites are expected to be included.
Stevns Cliff (Stevns Klint), a 15km long stretch of unique geological formations along the southeastern coast of Zealand, and the Danish portion of the Wadden Sea (Vadehavet) are among eight natural sites nominated for inclusion when UNESCO’s World Heritage Committee meets this weekend in Doha. If the two sites are approved as expected, they will be Denmark’s first natural sites on the list, joining locations such as the Grand Canyon, the Galapagos Islands and the Great Barrier Reef.
Greenland, an autonomous member of the Kingdom of Denmark, is included on the list with the Ilulissat Icefjord.
“That Denmark in all likelihood will now have two sites receive the World Heritage designation is huge,” Bolette Lehn Petersen of the Danish Agency for Culture (Kulturstyrelsen) told Politiken.
According to the UNESCO nomination documents, Stevns Cliff “illustrates the best-known global mass extinction event in the history of Earth”, displaying physical evidence of the asteroid impact 65 million years ago widely believed to have caused the extinction of dinosaurs. The rugged coastline, which reaches heights of up to 41 metres, is loaded with fossils and reveals geological layers spanning millions of years. The site currently draws approximately 100,000 visitors a year – a number that is expected to grow significantly with a World Heritage Site designation.
The Dutch and German portions of the Wadden Sea were inscribed on the World Heritage List in 2009, and this weekend the committee is expected to approve an extension of the designation to the Danish portion of the sea. The Wadden Sea is the home to sea mammals including the harbour seal and grey seal, as well as 10-12 million migrating birds that feed off the lush life found in the sea’s marshes and sandbars.
“The Wadden Sea has a unique and diverse nature, where thousands of animal and plant species live,” Culture Minister Marianna Jelved said when nominating the site last year. “With the nomination to UNESCO’s World Heritage List, we take an important step towards securing a one-of-a-kind piece of Danish nature.”
While the Wadden Sea and Stevns Cliff would be Denmark’s first nature sites on the list, three Danish sites are recognised as cultural heritage sites: the Jelling stone, Roskilde Cathedral and Kronborg Castle.