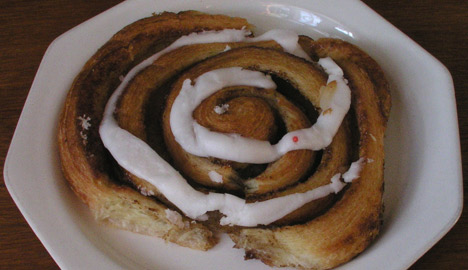 Cinnamon rolls have been reclassified as a treat only eaten 'occasionally', but don't worry – you can still have one every day. Photo: Wikimedia/Nillerdk
Denmark has escaped a feared EU ban on its much-loved cinnamon rolls by reclassifying them as a "traditional" food.
The hugely popular pastries have been threatened with an EU ban since regulators discovered in November that they typically exceed the EU limit on coumarin, a compound in cinnamon that is toxic in high doses.
Eurosceptic politicians cited the threatened bun ban as an example of EU meddling, and Danish media have dubbed the contentious issue "cinnamon-gate".
But on Monday the Danish Bakers' Association announced it had found a way around the EU limit of 15 milligrams of per kilogram of pastry — reclassifying cinnamon rolls as a traditional or seasonal food consumed only occasionally.
"After around six months' work we have agreed that the cinnamon roll and similar products are (considered) traditional Danish pastries and as such can contain up to 50 milligrams per kilogram of finished product," it said.
Coumarin has been banned as a food additive in several countries for decades because it can have a toxic effect on the kidneys and liver and some consumer groups have charged that it is potentially carcinogenic.
It is found in relatively high doses in cinnamon from China, one of two kinds most commonly sold on the world market. The Chinese variety is frequently used in store-bought baked goods.
A potential pastry ban was one of the issues highlighted in May's European elections by the populist Danish People's Party, which secured more than one in four votes after campaigning on a platform of "Less EU, more Denmark".

EU ELECTIONS
What you need to know about how the European elections work
Url copied to clipboard!