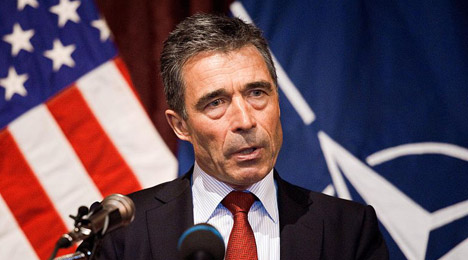 Former PM Anders Fogh Rasmussen was one of the world leaders who attended the Bilderberg annual meeting. File photo: US Department of Defense.
The highly secretive Bilderberg group's annual meeting was underway in Copenhagen on Friday, attracting members of the global elite as well as protestors and conspiracy theorists criticising its lack of transparency.
Some of this year's hand-picked participants were Google chief Eric Schmidt, NATO Secretary General Anders Fogh Rasmussen, British finance minister George Osborne, IMF managing director Christine Lagarde and former NSA director Keith Alexander.
Since its inception in 1954, the high calibre guest list, as well as the fact that the mysterious conference is not open to the media, has made it fertile ground for conspiracy theorists who have claimed it secretly controls world politics.
It also draws criticism from mainstream groups who believe its secrecy is incompatible with democratic ideals.
"We're against not being included in what's happening in there," said Reem Al Alami, a student who had come to protest against the meeting at Copenhagen's JW Marriot hotel.
"That's not how I think a democracy should work," she added, standing in a dusty parking lot facing the hotel, where a few dozen protestors, police and members of the media had gathered in the hope of catching a glimpse of the attendees.
Signs on display included an intricate chart claiming to show how Danish politicians had been part of an international Bilderberg conspiracy, titled "Something is rotten in the state of Denmark," and another one demanding more transparency.
Even though the annual four-day meet was launched to "foster dialogue between Europe and North America" — where most members come from — this year's edition included two Chinese members: Yiping Huang, an economics professor at Peking University, and He Liu, an economic official of ministerial ranking.
Inside the hotel, secured by the tight police presence that usually accompanies Bilderberg events, delegates were expected to discuss a host of topics that only for the second year have been revealed in an official press release.
Some of the subjects up for discussion were: "Is the economic recovery sustainable?", Ukraine, "Big shifts in technology and jobs" and "Does privacy exist?"
Police said the situation was calm as tourists strolled by the venue on a sunny Friday afternoon.
But the cost of security for the meeting has sparked debate in Denmark, where the populist Danish People's Party has demanded the government account for the full cost of sending police reinforcements to the capital.