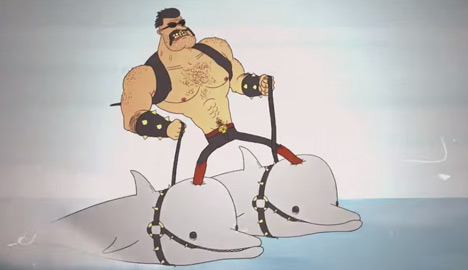 In a screenshot from the video, Voteman is seen riding a pair of dolphins on his way to force young hipsters to vote. Screenshot: YouTube
Denmark's parliament on Tuesday pulled an animated video that aimed to boost voter turnout in upcoming European elections by showing a violent cartoon superhero engaging in group sex.
The muscled, hairy-chested "Voteman" could be seen punching, slapping and slinging non-voters in a 95-second video that notched up 200,000 views on YouTube before it was taken offline amid a storm of criticism from politicians and social media users. Although pulled by parliament, the video can still be widely seen (including below).
Voteman was also shown in bed with five women — one of whom performed a sexual act — and throwing a frisky couple in bed through a window.
Viewers of the video complained that it was violent and sexist.
"Why does parliament think Voteman will make people vote?" tweeted Louise Madsen, saying the film "talks down to young people."
The speaker of the Danish parliament, Mogens Lykketoft, admitted parliament should have been "more circumspect about what we put our name to."
"Many people whose opinions I deeply respect have perceived the EU Information Centre's cartoon as far more serious and offensive than it is intended," Lykketoft, said in comments emailed to AFP.
The 200,000 kroner (26,795 euros, $36,729) clip featured a spoof Hollywood voice-over explaining why Danes should vote in the May 25 EU election.
"Voteman forgot to vote at a European parliament election. That taught him a painful lesson," it said.
"No influence on climate regulation, agricultural subsidies, chemicals in toys, and the amount of cinnamon allowed in his cinnamon buns," it said.
Denmark's food safety regulator sparked a heated debate last year when it said EU guidelines could force bakers to use less cinnamon in the country's traditional cinnamon rolls, since overconsumption could cause liver damage in some people.
The video ended by reassuring viewers that "no hipsters were harmed in the making of this film".
The get-out-the-vote push comes as the anti-immigrant Danish People's Party is polling at 26 percent ahead of the European elections, helped by public concern over whether the Danish welfare system is too generous to EU guest workers.
See the controversial advertisement here: